Create your own live Rock for marine aquarium. DIY

Saltwater Aquarium or Freshwater Aquarium, The Fish, Corals, ecosystems, Parts DIY and so on
Post Reply
1 post • Page 1 of 1

Create your own live Rock for marine aquarium. DIY

Live rock is readily available in stores and online, but there are some compelling reasons to try creating your own live rock structure. Making your own live rock can certainly save a whole load of cash, and it allows you to fabricate some structures and shapes that are hard to get hold of. It also reduces the pressure on areas where rock is harvested. 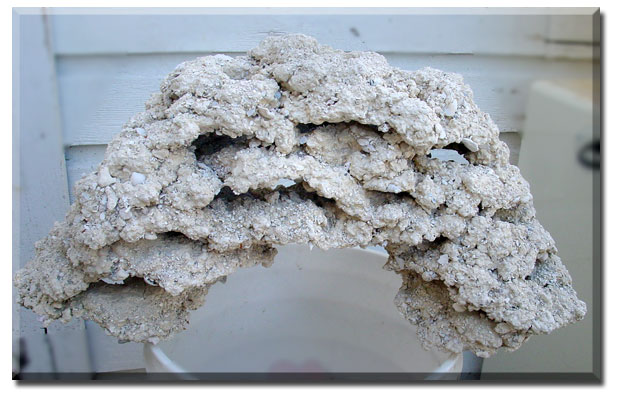 There is a tendency to really stretch your artistic muscles when making structures for your aquascape, but when possible, try to mimic real reefs and genuine coral formations to avoid the artificial look.

Having the ability to create small arches and more sculpted components that will fit together easily is also a great reason to make your own live rock. With the increasing popularity of nano systems these days, homemade live rock structures can offer more delicate constructions that still allow for an open aquascape replete with holes and crevices.

The process of making live rock is fairly straightforward. Mix the components, shape the rock, and allow it to dry. Cure in fresh water, add to an existing system to acquire the bacterial colonies necessary, and then add to a new or existing system.

This process yields what is, in effect, concrete. Concrete contains three principal ingredients: cement, water, and aggregate. In this case, our cement is ordinary white Portland cement available from any building store.

Our aggregate needs to be a mix of crushed coral, aragonite, coral sand, crushed sea shell, or oyster grit, in any combination. But best results are obtained if a good balance is maintained between larger and smaller particles.

Where this process differs from making concrete is the addition of rock salt. Coarse rock salt can be bought at some feed supply stores or (more expensively) from the supermarket. The addition of salt means that over time, as the salt dissolves during curing (we’ll come to this in a moment), small spaces in the rock are created. These are ideal for bacterial colonization and mimic the structure of real live rock.

Mixing is easy. I prefer a ratio of three parts aggregate to one part cement, which should be mixed with water to make a thick, oatmeal-like consistency. Take care not to breathe the cement dust, and wear breathing protection. Only when it’s ready for molding do you add the salt. This stops the salt from dissolving immediately.

Once the salt is in, you can start having some fun. A good tip is to make the structure by scooping your mixture onto a bed of coral sand to harden. For good three-dimensional shapes, you can make hollows in this sand bed and place newly fashioned rocks over the holes or into the cavity to create shapes with depth. I should add that you should wear gloves at this point, as cement can be very corrosive to your skin. As you build up your structures, place extra sand around the rocks to support them and stop them from slumping and losing their nicely shaped structure.

It is tempting to try to create even more realism by sticking pieces of broken coral into your new rocks. This can work, but it can also look very fake. If you want this look, you may be better off using your DIY rocks as base rock, and then adding some real branching live rock to your aquascape later on.

It’s also very useful to make smaller components for fragging, such as small domes and mounds onto which you might attach zoanthid frags to create attractive dome colonies or perhaps some shallow, slightly stretched bowls, which are great for clams to use for attachment points.

You will now need to leave your rocks for no less than 12 hours to cure, or as we say in the UK, “go off.” I leave mine in a shady spot in the garden. If you are lucky enough to have a very sunny climate, cover the rocks in a tarp—you don’t want the rock to dry before the cement has time to work. If you live in a cold or rainy part of the world and are subject to English weather as I am, avoid frost and the rocks getting washed away!

The next step is to make the rocks suitable to be placed into an aquarium, and that requires soaking your rocks in fresh water. First, wash off loose material, and then soak the rocks in water that you change every couple of days. This allows the salt to fully dissolve and the cement to stabilize. When the water is at a pH of around 7.5 and salt content is zero, the rock is ready. This may take up to a week depending on the size of your rocks, but don’t rush it.

Your rock is now ready to form your basic reef structure, but there’s nothing about it that’s live—it’s very much dead rock. You can add it to a new system that will be getting a load of real live rock added as well, and it will slowly begin to function as live rock in time. However, if you rely on this rock alone, without any seeding, it will take many weeks if not months before the rocks are effectively colonized by bacteria that complete the nitrification process.

For best results, your rock should be added into the sump of an existing and healthy aquarium. This will allow it to gather a good assortment of microorganisms and other life, including copepods, gammarus shrimps, fan worms, coralline algae, and so on—it will be a more representative slice of marine life.

I have seen systems set up where hobbyists have sacrificed a household blender to macerate live rock into a paste. This is then added to a new tank of homemade rock or reef ceramic to speed up the colonization process and by all accounts worked very well.

Is DIY Rock as Good as Ocean Rock?

Determining if DIY is as good as ocean rock really depends upon your definition. It is likely to be more environmentally responsible, and it is very likely to be much cheaper than rock from the ocean.

However, DIY live rock will only ever have the same subset of marine life on and within it as the rock or sump it sat next to or in as it was seeded. So if your current rock stock has limited species diversity (bacterial and microfaunal), your new rock will be poor as well. A system-seeding DIY live rock that is packed with life and has occasional boosts of diversity with the inclusion of some rock from the ocean can generate great results.

A good compromise, as I mention above, is the use of some DIY rock for structural elements in your aquascaping or as a base for real live rock that will help save you some cash. As ever, take your time and be patient, and you will succeed.